Mercedez Benz has been making monsters one after another. They have the concept of building luxury cars with staggering power matched with astonishing visual pleasure and this can be proven by another variety of the Mercedes Benz SLS AMG that was caught by the cameras. This is a roadster completely undisguised following a testing at the Nürburgring and no other word to describe this but a piece of beauty and madness!

The luxury sports car is scheduled to be unveiled later this year and is slated to be a 2012 model thereafter. This car manufacturer is still keeping the specs of this new beast top secret but the exterior package still looks the same with its original model.

The debut of this new madness will be at the Frankfurt motor show in September. The new appeal of the SLS AMG will surely catch the attention of car enthusiast and this is another piece of blissful piece of machinery to appear before our eyes! 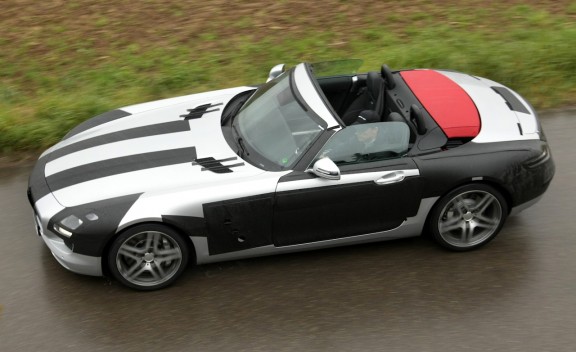 Mercedez Benz has been making monsters one after another. They have the concept of building luxury cars with staggering power matched with...