Infiniti, the Japanese automaker, has one fine selection for a hybrid offering state of the art technology for 2012.  They will be producing the M35 hybrid which is set as a luxury sedan.

This car manufacturer made one unique blueprint for their hybrid.  Most hybrids have two electric motors-one would be for the propulsion and one will serve as a unit that recharges the battery while braking.  This wreaks havoc to the whole breaking system because aside from the additional weight, hybrid breaks tend to grab when the second motor starts kick in and recharge the batteries.

Infiniti had a different approach, they used a single motor that performs two separate task.  It serves as a power assist to the engine and as a generator to the vehicle’s components.  The petrol engine of the M35 Hybrid is a 3.5 liter V6 engine and its combined power with the electric motor can generate a grand total of 369 bhp with 457 lb ft of torque.

This can run under an all electric motor, all petrol or the combination of the both allowing freedom for the driver’s preferences.  The electric motor gets its power from a 1.3 kWh lithium battery pack and fitted right on its trunk.

The M35 hybrid is definitely on a class of its own and it will be an icon for next generation cars. 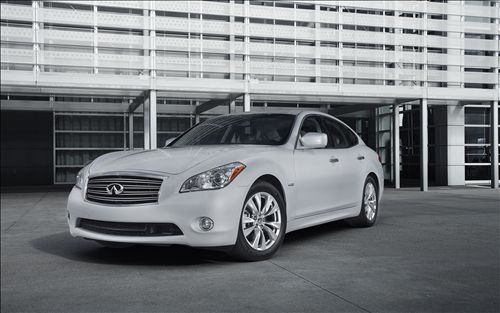 Infiniti, the Japanese automaker, has one fine selection for a hybrid offering state of the art technology for 2012.  They will be producing the M35...