Renowned car tuner edo Competition Motorsport is at the peak of their career with their magnificent Porsche Panamera Turbo dubbed as the Moby Dick.  This is one cool as ice creation from the masters and have been totally modified to provide staggering performance.

Mansory is included in the picture with their drooling aerodynamic package which is an option for every customer.  edo high performance exhaust system that has four massive stainless steel tips with butterfly valve is fitted on its rear.

To give an aggressive stance they have fitted this Panamera with large 22 inch wheels.  Right on its suspension is an edo electronic lowering module that brings down the car’s center of gravity making it responsive on corners.

The powerplant of this ferocious beast is a V8 twin turbo engine tweaked to produce an enormous 750 bhp.  This is one giant leap compared to the stock performance of 500 bhp.  This will allow this sports car to shoot from 0-62 mph in under four seconds until it reaches the top speed of 340 km/h or equivalent to 21 mph.

The edo Competition Moby Dick Porsche Panamera Turbo is one hell of a creation ready to blow the minds of car fanatics! 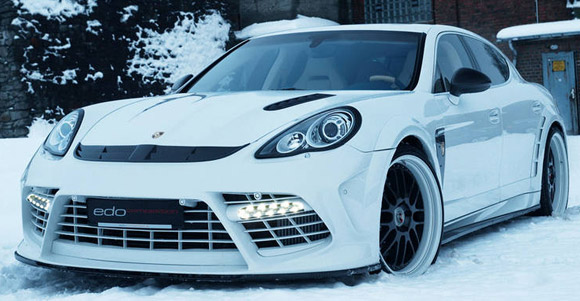 Renowned car tuner edo Competition Motorsport is at the peak of their career with their magnificent Porsche Panamera Turbo dubbed as the Moby Dick. ...