Get ready to check the name of this exotic car in the list of world records.  This is the 2011 SSC Ultimate Aero II created and manufactured by Shelby Supercars.  Some would refer to it as the Bugatti Veyron Supersport Killer as it is back to regain the title of the fastest production car ever made.  A few specs have only been released and Shelby Supercars is more than likely keeping the details top secret until its official testing.

The shape of this car can be compared to that of an alien ship with its body engineered to be aerodynamically fit.  It even has the weirdest rear spoiler but all of it is done to maximize its performance.  Some goodies that stayed on the Aero II are the traction control, ABS and Brembo carbon ceramic brakes.

For your mind to be blown away this is powered by four cam twin turbo charged 6.8 liter engine.  This can produce a whopping 1,350 bhp and can reach a top speed of 442 km/h (274mp/h).  They also used an active air break system to make this exotic car be assisted in putting this beast to a halt.  With the monstrous power the Aero II have, this may really be the fastest production supercar ever. 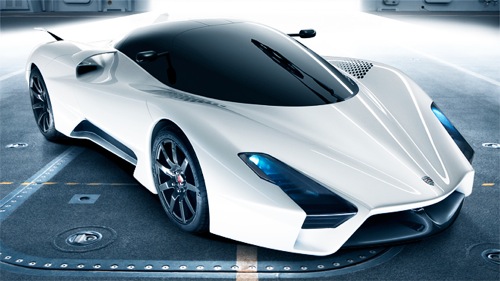 Get ready to check the name of this exotic car in the list of world records.  This is the 2011 SSC Ultimate Aero II created and manufactured by...