The 2011 Lexus LFA is another exotic car from the car gods and it will be set loose on the roads probably in late of 2010.  As its sleek styling goes, you know this car speaks performance.  The LFA is a true example of an over the edge car, 65% of its body is composed of carbon fiber with reinforced polymer and the other 35% is made up of aluminum.  This allows the LFA to be light and rigid at the same time.  The LFA also has aluminum subframes on the front and rear that can be replaced or removed easily to minimize repair cost and to have trouble-free accessibility.

The car’s cabin is lavishly crafted with leather, carbon fiber and metal trimmings is also used giving a sense of elegance and luxury. The dash is incorporated with a digital rev and speedometer that also have easy to read indicators.

The Lexus LFA is a front engined rear wheel drive super car which boasts a 4.8 liter V10 and paired to a 6 speed automated sequential gearbox.  This car can produce a colossal 552 bhp with 354 lb ft of torque and can swiftly run form 0-6 mph in just 3.6 sec.

Only 500 LFA models will be released worldwide and with rarity, exclusivity plus a name that exemplifies over the edge power and style…this is a car that surelyhave a price tag that can go way beyond our wildest dreams. 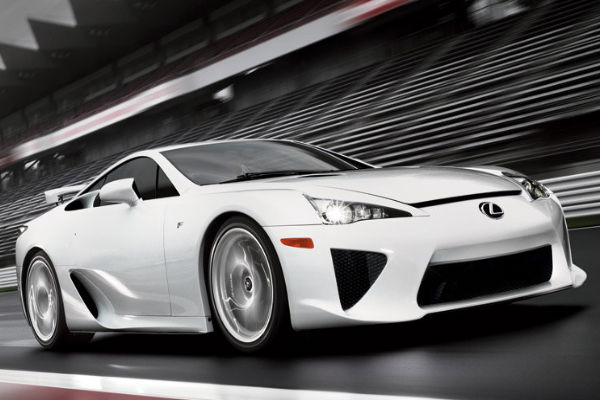 The 2011 Lexus LFA is another exotic car from the car gods and it will be set loose on the roads probably in late of 2010.  As its sleek styling...