The G25 sedan is another classic car from Infiniti’s G series models.  This is a more reasonably priced car and offered as an alternative to those who can’t afford to get that bigger and more expensive G37.  This sedan will have its grand appearance at the Pebble Beach Concours d’ Elegance.

The G25’s cabin still has that classic executive feel and exudes a sense of luxury.  The interior features an all leather seat with a carefully crafted dashboard with aluminum trims.  It is still filled with all the amenities and gadgetries like the G37 and offered in three models; the G25 Sedan, G25 Sedan Journey and the all wheel drive G25x.

This car is powered by a 2.5 liter 24 valve V6 engine that gives out a respectable 218 bhp with 187 lb ft of torque (and this is actually less 110 bhp compared to its bigger brother the G37).  The engine is mated to a 7 speed automatic transmission and power is transmitted to its rear wheels but you still have the option of getting an AWD version.

One will think if the G25 is a better option from the G37 and that will really depend on the person who will buy a car.  If you’re into practicality the G25 is up for the grabs but if you are conscious to the car’s power and capability then you’d probably need a G37.  The sedan’s size is not that too much of an issue because they both offer an all adequate room space whether on the trunk or in the cabin. 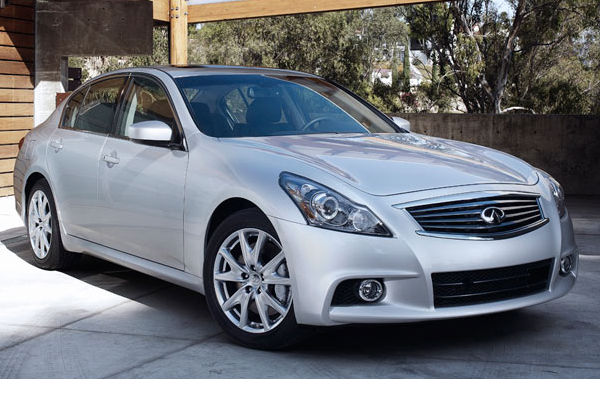 The G25 sedan is another classic car from Infiniti’s G series models.  This is a more reasonably priced car and offered as an alternative to those...