With enough money, enough time and a whole lot of dedication, you can afford a Lambo Gallardo, tune it and then make it go as fast as hell. One guy – Gidi Chamdi, had the life he wanted and acquired everything he needed to make the fastest Lamborghini Gallardo in the world. This is Underground Racing tuned machine for the purposes of battling the half mile record. Only last week Gidi Chamdi gave breaking the record a go and accelerated the Gallardo to 234.8 mph. He was victorious and set a new world record. Amazingly, the record for the fastest car at an event like this was held by Underground racing since 2009 and the magnificent V10 powered road legal Gallardo was able to throw it down.

Interestingly, Gidi Chamdi gave all he could with the Nissan GT-R as well. He did not succeed to hit such amazing speeds with it despite tuning it to level when idiocy is the only way to go. The Gallardo was obviously a better platform and it made Underground Racing very visible on the world’s tuner maps.
We aren’t quite sure what kind of modifications were done to the 5,2 liter engine in this car, but the turbocharger was thrown in, the transmission had to be reinforced, the suspension as well, with the cooling, intake system and exhaust being absolutely redesigned in every respect. The power output thus rose far beyond 1.000 HP. We are quite certain this car is even more powerful than 1.500 HP.

With enough money, enough time and a whole lot of dedication, you can afford a Lambo Gallardo, tune it and then make it go as fast as hell. One guy -... 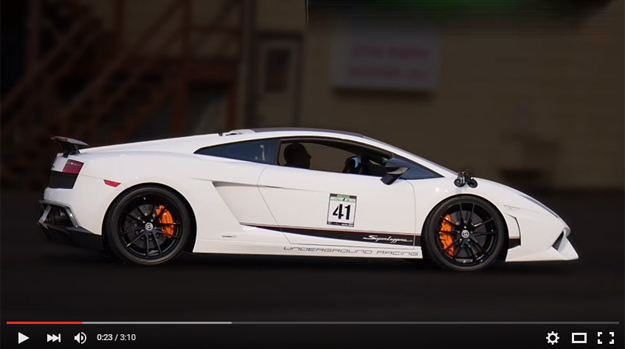